When starting research for an assignment, your instructor usually says you need a certain number of sources on your topic, will tell you a page length, and will tell you what types of sources you will need to use. These sources might include books, ebooks, periodical articles, media, and websites. Note: a periodical is something that is published periodically such as a newspaper, a magazine, or a scholarly journal.

When starting research on your topic, ask yourself the following questions:

You will be able to answer these questions based on instructions given to you by your instructor and based on your topic.

When scholars or researchers want to publish their research and findings as an article in a journal, they submit their work to what is called a peer-review process. Their article is sent to other scholars in the same field who analyze it and make sure it is of high quality, relevant, valid, and not just one person's opinion. They then send it back for revisions or approve it for publication.

Articles in magazines like Time, People, Newsweek, or Psychology Today don't go through a peer review process so you cannot count on them being scholarly. Newspapers are also considered popular sources.

Note: sometimes scholarly articles may be referred to as peer-reviewed articles.

Some reasons why you might use a popular or a scholarly source in research:

This table goes over the difference between a scholarly journal article and a popular magazine article: 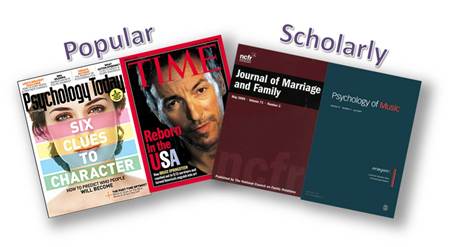 The main distinction between primary and secondary sources is how far removed they are from the event they are describing.

Primary sources are first-hand accounts written at the time of an event or maybe shortly afterwards. They are the first telling of something that has happened, and are tellings by those who witnessed or experienced the actual event. Primary sources can be works that are unpublished such as letters, memoirs, diaries, art, photographs, maps, video, audio recordings, speeches, interviews, etc. They can also be works that are published such as newspapers, magazines, research reports, or published interviews and stories. There usually are not a lot of copies of primary sources.

When scholars or researchers want to publish their research and findings in a journal, they submit their work to what is called a peer-review process. Their article is sent to other scholars in the same field who analyze it and make sure it is of high quality, relevant, valid, and not just one person's opinion. They then send it back for revisions or approve it for publication. Journal articles may also be called as scholarly articles, peer-reviewed articles, or academic articles.

Magazines publish information about a topic about a week after an event occurs and in most cases do not provide in-depth research. The focus of magazines are usually on general topics and topics of interest to specific groups such as music, sports, exercise, fashion, or home decorating fans. They are generally published weekly or monthly, but could be published semi-monthly or several times a year.

Newspapers report on a topic generally the day after an event occurs. They are generally published daily, but can be published weekly or bi-weekly. They can also focus nationally or locally, including to a particular state or city.

Trade publications publishes information that is of interest to members of a particular profession or industry such as educators, lawyers, welders, law enforcement, etc. They generally cover recent developments in the field or summarize latest research findings in the field. Trade publications are sometimes referred to as trade journals.

Books are great information resources but are not good if you need the latest information on a topic. It takes about a year (or longer) for a book to get published, so by the time you have the book in your hand, the information in that book is at least a year out of date.

The initial information that is disseminated includes quick facts and interviews about the event that is published in the news and online.  As time progresses, the information is studied in more depth and is then published in journals or books.

View this video to learn more about the Information Timeline and Types of Sources:

So if you have a new or recent topic, you are not likely going to find much in journals or books. Also, information that comes out initially may or may not be properly verified and might be biased based on who is reporting it. As information progresses down the timeline, it is looked at in more depth and is then published in scholarly journal articles and books. For this reason, most instructors prefer you to use scholarly journal articles and books as your sources.